At some point in your life, you may have been asked to create a mental map of your hometown. If you’re unfamiliar with the concept, a mental map is a diagram of your town or city drawn from your own memory. The idea isn’t necessarily to be accurate, but to illustrate what matters to the map maker. So mental maps usually focus on the places the map maker most frequently inhabits, such as their home, their workplace, where they shop, anywhere they go for fun, and the routes they take between. It’s a fun exercise, because you get to illustrate your life while also learning the limitations of your understanding of your hometown. It’s especially informative if you do it as part of a group, because you can see how your understanding of the same town or city is different from someone else’s.

But while mental mapping is a valuable exercise that I would encourage anyone to try, your mental map shouldn’t be used to formulate policy or dictate major decisions like where to build new infrastructure. After all, one of the points of mental mapping is to demonstrate the limitations of your knowledge. Important decisions with city-wide consequences need to take into consideration the views and needs of the many, not the individual. Fortunately, none of our mental maps are likely to ever have any effect on such important matters.

But then, none of us are overhyped Silicon Valley billionaires.

Most of you have certainly heard of Elon Musk’s “Boring Company” by now. The vaguely defined point of this company is to find cheaper and faster ways of digging tunnels for the purpose of solving traffic. Transportation experts have expressed healthy skepticism of Musk’s claims; Laura Nelson of the Los Angeles Times noted that digging a tunnel is usually the fastest part; it’s the permitting and environmental reviews that take the most time. And then there’s the problem that digging tunnels for cars isn’t fundamentally different from what we’ve already been doing; however sleek they may look, this is just building a freeway underground, and building freeways doesn’t solve traffic congestion. In order to keep access points to the tunnel system from getting congested themselves, you’d have to control entry somehow (probably by charging a lot of money to use the system).

But I’ll leave those detailed arguments to others. Right now, I want to talk about this map, just released by the Boring Company:

What you’re looking at is a conceptual map of Elon Musk’s tunnel system. The red part is the section that Musk is trying to get approval to build right now, while the blue parts are meant to be possible expansions. While the Boring Company wants to make clear that this is only meant as a concept, I just want to take a moment to marvel at how blatantly this map diagrams Musk’s mental view of Los Angeles.

Plenty of writers have already noted that this project seems to be designed first and foremost as a way for Musk—who reportedly lives in Bel-Air and commutes along the 405 to Hawthorne—to shorten his own commute. That’s gross enough as it is, when you have the kind of money and influence (and potential to do real good) that Musk does. But what I find incredible about this map is that it shows a entire system designed solely with one man’s desires in mind.

Beyond Musk’s commute (with an extension to the Valley should he ever need to go there), the tunnels continue to LAX, because obviously Mr. Musk is a very busy man who often needs to get on a plane to fly elsewhere. The tunnels continue down the 405 to… another airport, which I’m guessing is Musk’s backup option for those days when LAX is too crowded. Then there are branch tunnels to all the places where he would want to take his friends out for a good time. There are tunnels to the beaches, to Downtown, to trendy neighborhoods like Silver Lake and Leimert Park (but not Hollywood of course, because that’s for all those lame tourists), with stops at The Getty, the football and baseball stadiums, and the convention center (where I’m sure he has to give the occasional TED talk)

But Musk is not without generosity, citizens! He has included a solitary stop for the not-yet gentrified masses of South L.A., conveniently labeled “South LA.” You’re welcome.

Really, I’m just a little in shock right now. I’ve seen a lot of hypothetical transit maps, and I’ve never seen such pure self-projection on one since eight-year old me drew a map of his neighborhood with all the train lines redirected to stop next to his house. The complete and utter disregard for the needs of anyone who isn’t Elon Musk is nothing short of breathtaking.

To further illustrate, compare the above map to this 1980 diagram, showing the proposed rail system that we are still building today:

Or this 1925 plan, illustrating a rapid transit system that was never realized: 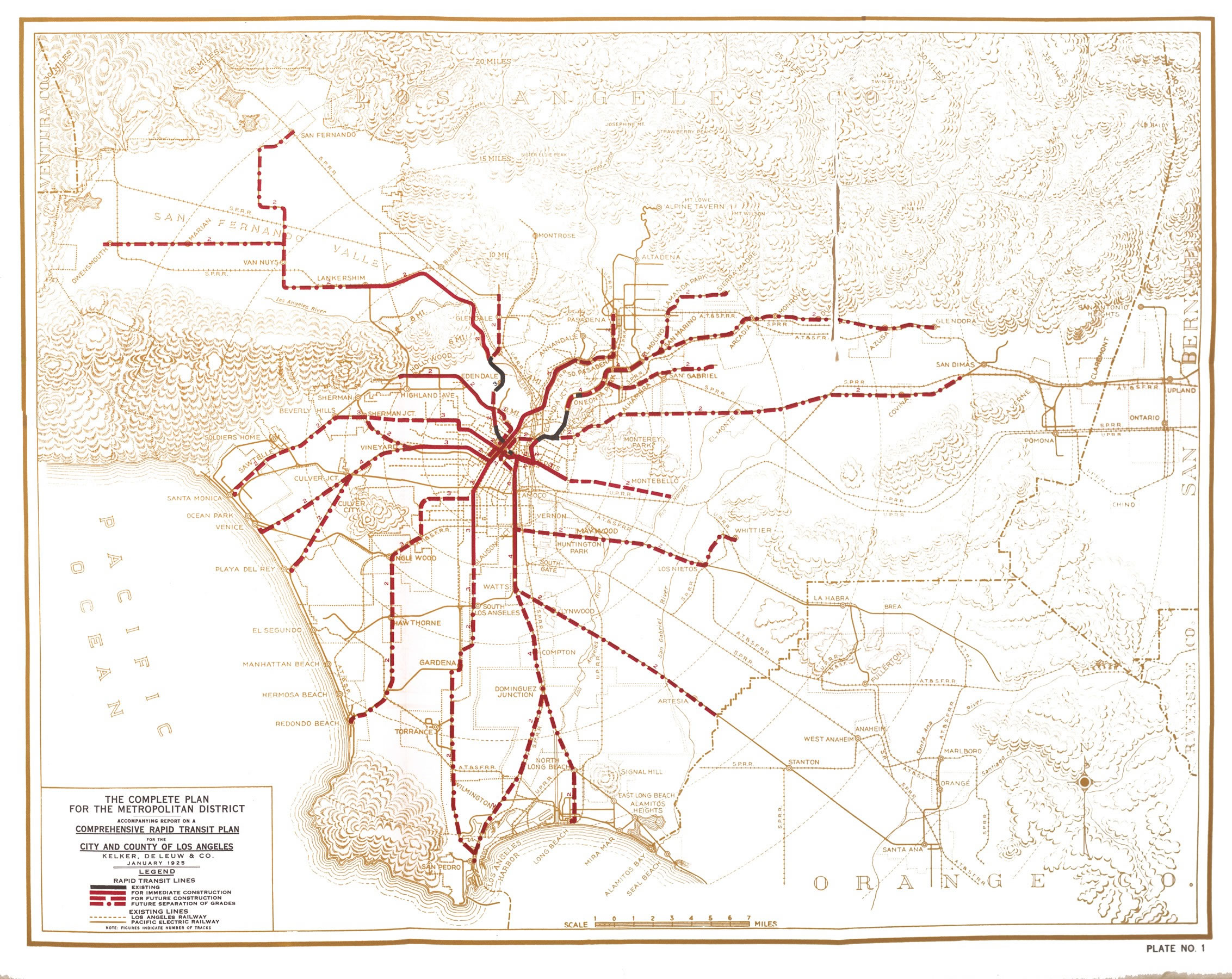 These are the kind of maps that get made when you have to take the masses into account. They’re not devoid of elitist demands—plenty of business and political interests are reflected by what’s depicted in them—but they at least reflect the consideration of a populace beyond one solitary individual.

Even on a strictly aesthetic level, I cherish maps as a tool and an art form and am deeply offended by what Musk has drawn. That someone could be so shameless as to literally redraw a city in their own image and present it to the world as a glorious and far-reaching vision is gross and ought to be mocked, not celebrated.